Skip to content
2013 – What a year! Both personally and professionally. The last few months especially have been a huge challenge, and those that know me well will understand why. This year has presented a number of huge challenges, and has presented a whole new range of opportunities.
In 2010 I made the huge decision to go contracting, especially where in the South West of England there was a dearth of decent contract roles. However at the time I felt that this was the right move for myself personally and professionally. It has had its ups and downs, but has never been boring. I would heartily recommend it to those who aren’t afraid of change.
However the last six months has brought an even bigger challenge…which is what I would like to share with you now.
Since June 2013 I have been working as a Contract Test Engineer at New Voice Media in Basingstoke. NVM produce great solutions for business to manage their contact and customer service centres, including a raft of call centre applications and services. As part of my work in the development team there has been the opportunity to grow and develop my testing skills, specifically in exploratory and security testing.
The technical and professional challenge is huge, with a steep learning curve. Exposure to a DevOps environment has meant that upskilling and knowledge sharing has been key to developing the test capabilities within the team. Without that, we would be always be on the back foot.
If the environment I was invited into hadn’t been so exciting and interesting, then I wouldnt have felt that moving away from contracting would have been a step forward. Instead, I find myself now a pemenant job in a fantastic team of people, both developers and testers. Sure, some personal circumstances have been a driver to this decision, but at this moment I feel it has been a positive step.
I can hear the cries of derision from my colleagues in the contract market, who would say that I would be resting on my laurels and trying to get comfortable, missing out on the big bucks. Not a bit of it. Skill development and knowledge sharing within a great, positive environment were a major motivator in this decision to go back to permenant work.
I had a good run at contracting, with several great contracts, including one ongoing for sometime. I’d developed a good, but not great reputation, for reliability, solidity and innovation at other organisations in the past. Resting on my laurels would be to soley rely on that reputation, to remain static despite having the nomadic life of a contractor. This I feel would eventually lead to some kind of professional inertia, where I was only considering my daily rate; not my daily learning.
During the time I was contracting, I felt disconnected with the community of testers. Being based predominately in the south west hasn’t exactly helped with this, but now there is a burgeoning testing community in the Bristol area who are active in their desire to learn and develop from each other. 2013 brought with it the challenge of interacting and egaging with the test community much more. It opened doors to challenges and opportunities not necessarily open to me in the contract world.
I’m now working with a team of highly skilled people, but also people who don’t get comfortable. It is a team that is constantly trying to find ways to improve how they work and do their jobs, in order to help make fantastic products. I’m also going to get to mentor other testers, whilst not exactly new to me, hasn’t always been my first priority. Now on top of my other work, it is a key part of my role, and one that I am looking forward to greatly.
2014 is going to be very hard work, both professionally and personally. But I know that the community is there for you to support your learning and development, if only you are willing to take that deep breath and big step into giving back to it.
This photo of Crooklets Beach in Bude sums up what I feel right now…under the crystal blue skies, new beginings and a huge open space to play on. I can’t wait. 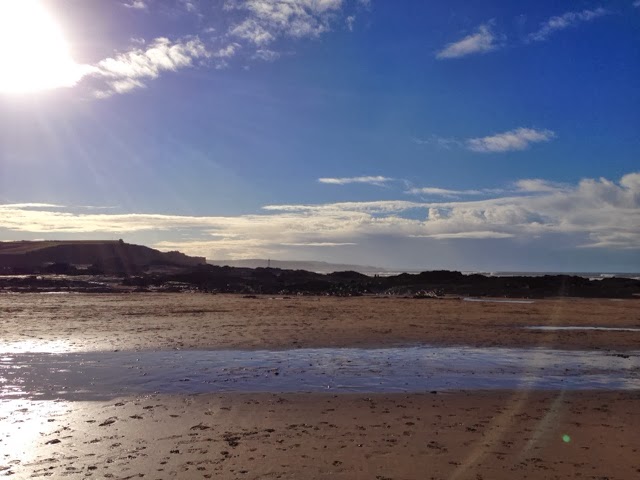